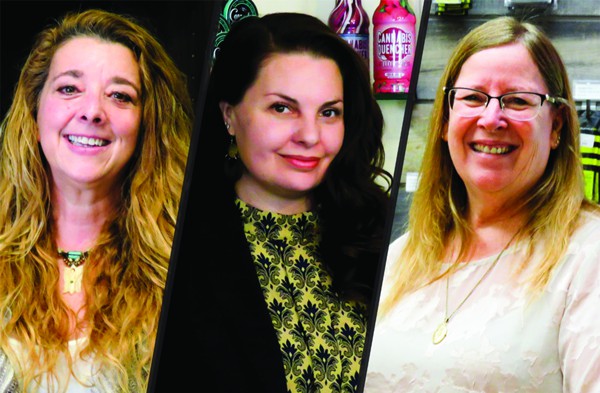 Part one in a three-part series looks at three local trailblazers in the medical marijuana movement.

Aundre Speciale was living in Venice Beach when her neighbor, Jack Herer, invited her to join his traveling legalization effort. “Jack really gave me a place and a cause, a purpose to fight,” said Speciale. In 2004, then a single mom, she opened the nonprofit Capital Wellness with the idea that cannabis belonged within the larger community of alternative health. She has since opened six more dispensaries, including Abatin Wellness.

Lanette Davies doesn’t use cannabis. Her entrance to the industry in 2005 was inspired by her daughter’s rare bone disease, chronic recurring multifocal osteomyelitis. With no known cure, the family’s persistence and Christian faith eventually took them to Palo Alto. “Stanford Hospital gave us the first pediatric recommendation to use cannabis,” said Davies, “and Canna Care was born.” Cannabis saved their daughter, and Lanette became a local advocate.

Kimberly Cargile studied cellular molecular biology, psychology and social justice at Humboldt State University, working through college as a fitness trainer and cannabis cultivator. “I was learning more about natural medicine, studying it,” said Cargile. After working for Speciale in 2007, Cargile soon realized her own holistic vision for a dispensary, A Therapeutic Alternative.

What was it like in those early years? “Terrifying. We thought we were going to get raided every day,” said Cargile. “But the people we were helping were so grateful and their stories were so inspiring that it was worth it.” Davies feared Child Protective Services. “We had raid charts and ran drills,” she said. “Who is going to pick up your kids from school, so they’re not picked up by CPS?”

“I’ve had to activate that plan!” said Speciale, who practiced dropping to the floor with her children, and taught them to “trust the policemen,” even if they were taking her away. Fearing the local CPS, Speciale moved to Alameda County and commuted back to Sacramento.

The courage of women like Speciale, Davies and Cargile helped build a foundation of legitimacy upon which the local industry now stands.